Processing a Charge Off and Non-Accruals

Processing a Charge Off and Non-Accruals

Charging off a Lease or a Loan in ASPIRE is a straightforward process although there are a couple different methods and options to do so.

A Global Setting controls the variability for loan Charge-Offs:

Contract items for charge offs are system defined so users do not need to create a new contract item for them.

The only other configuration for these items are the interface accounts.  Once they are configured, open the contract > Contract Explorer > Main.  Select Rewrite Type > Contract Modification and then Charge-Off for the Reason Code if applicable.

Go into the Financing and Adjustments tab and add a non-financed contract item.

Using the contract modification allows for partial charge-off to principal.

The value field will default in the outstanding principal but it can be adjusted as necessary.

Charging off though re-write type requires the configuration change in the first screenshot.

Once this has been updated, rewrite type becomes available.

The contract status will change to Charge-Off using the rewrite type.

Below are examples of Journal Entries based on the Charge-Off type for the Loan and what it looks like if the contract continues to be serviced.

Usually charged-off with an effective date of the last payment received or that  plus one day. 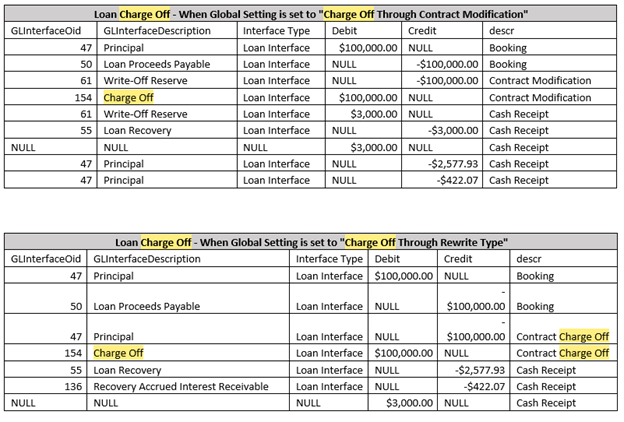 For leases, the process is like the loan example with the contract modification.  There are system defined contract items for Fee, lease, Residual, and Sales Tax Receivable.

Select any one of these to charge-off the respective amount.

The system will default the outstanding amount into the field but this can be changed as in the loan example.

Below are the Journal Entries that would be expected in ASPIRE.

accrual keeps the deal active as it goes thru court/bankruptcy.

a.       Leases - Usual effective date of charge off 90 days after last payment received.

b.       Loans - Usually charged-off with an effective date of the last payment received or that  plus one day.

3.      Have I run contract Earnings since the Effective Date of Non-Accrual, if so, posting the Non-Accrual will reverse contract earnings and put the reversed amount in non-accrual earnings account.

b.       Moves income from earned income to non-accrual income

4.       If still receiving payments on contract in non-accrual

a.       Works like it normally does, lease receivable and current receivable will be written down

b.       Earnings on those payments will go to non-accrual income until the deal is taken off non-accrual

6.       To take off non-accrual, do another contract modification, uncheck the non-accrual box on the Accounting tab, earnings will be removed from non-accrual earnings back to contract earnings when posted.

Write off the PV of the deal, remove from balance sheet. Puts it in reserve.  No longer any contract earnings on this deal after a

charge-off. This is bad debt that will be written off. Any payments received on this will go into a recovery account. There is no Undo Charge-off.

You can continue to invoice a charged off deal, maybe required for legal reasons.

2.       Go to Financing and Adjustments tab, there are Charge Off – Add Adjustment Items

b.       PV of the asset receivable defaults into the value

c.       May leave residual on the books because that’s the value of the asset after repo

d.       Posting Confirmation – puts the charged off value into bad debt reserve account, charges off the interest portion of deferred income lease and gross lease receivable because this won’t earn interest any longer

i.      Current contract receivable and current receivable (currently open invoices) still show (sum those two and that was the amount charged off)

ii.      No deferred income cause it’s not earning any longer

iv.      There are some accelerate at charge-off settings for IDC (Global Settings)

i.      Post payment and see there is some Recover and bad debt reserve activity